James Gruenke’s desire to help his students grows into a book deal that will help thousands.

What started as a manual to help his students learn how to program robots turned into a book that will get used around the world in both higher education and workplace settings. “Programming FANUC® Robots for Industry Applications,” by Lakeshore Technical College Electro-Mechanical Program Coordinator/Instructor James Gruenke, is now available through American Technical Publishers in both printed and digital formats.

“When I found out the only book available for students was the FANUC user manual, I knew that was a big hole. My initial goal was to write a manual that would help my students, the beginner programmers, especially those who learn best by reading,” said Gruenke, who teaches courses in Lakeshore’s electro-mechanical automation technology and maintenance technician programs, as well as the mechatronics apprenticeship.

Gruenke began teaching at Lakeshore in 2009 after semi-retiring from a 25-year career that allowed him to work around the world on automation equipment, including robots. He worked many of those years at HUSCO and Federal-Mogul (purchased by Tenneco in 2018). Prior to working in industry, he served in the U.S. Army as supervisor of a heavy equipment and power generation maintenance shop in Alaska. Gruenke, who is FANUC-certified, holds a master’s degree in career and technical education and a bachelor’s degree in industrial engineering from the University of Wisconsin-Stout.

After receiving approval from Lakeshore to use the manual he created for his own instructional purposes, he decided to pursue approval for it to be used within the Wisconsin Technical College System. The manual was approved.

“James is a national thought leader in the robotics field and we are proud of the impact his book will have on our students, and those across the country,” said Lakeshore President Dr. Paul Carlsen.
According to Gruenke, instructional materials for robotics are not easy to find. As he met other college and high school instructors who also taught robotics, many told him they found it difficult to put classes together and even they struggled themselves with programming. Because of this lack of instructional material, Gruenke was contacted in 2018 by a representative from American Technical Publishers who came across Gruenke’s manual. The publisher offered to help Gruenke provide other instructors and students an instructional tool to help them with programming. After coming to an agreement, Gruenke spent most of his free time completing what resulted in a 240-page book the publisher describes as a “user-friendly text/workbook.” Originally expected to publish in 2020, the pandemic caused delays and pushed Gruenke’s publication date to the end of April 2021.

“Having my manual turn into a book that thousands of students and FANUC users can benefit from was unexpected, though I am excited to be filling that instructional gap,” Gruenke said.

Due to rapidly changing technology, Gruenke’s time invested in the book will continue. His agreement with the publisher includes updates. Gruenke says he is in discussions with the regional FANUC educational distributor and would like FANUC to include his textbook with every purchase of their robots.

Robots built by FANUC are among the most widely used robots in Wisconsin and around the world. They are used in manufacturing environments for improving quality, increasing capacity, building products too intricate for human hands to assemble, overcoming skills shortages, and more. Demand is high for employees who can install, program, maintain, and repair robots.

Details about “Programming FANUC® Robots for Industry Applications” can be found at atplearning.com/robotics. 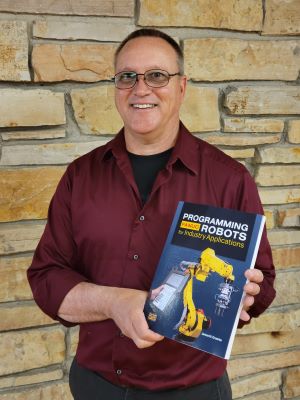