Enrolling in the same program wasn’t planned, though it’s working out very well.

When Alivia Muckerheide walks across the stage to receive her nursing degree in December, her mother will be cheering her on while anticipating her own graduation the following semester, from the same program. The mother daughter nursing student duo has been attending Lakeshore Technical College together since January 2021.

Alivia started attending Lakeshore in 2018 while attending Sheboygan Falls High School and participating in the Youth Apprenticeship program. She took the accelerated Nursing Assistant course that summer and continued taking one class each semester, saving money each step along the way since courses taken as a YA didn’t cost her anything.

As a high school senior in spring 2020, she graduated without experiencing a traditional ceremony, a senior prom, or senior trip. Alivia says she went “in the blink of an eye” from attending high school classes virtually to in-person learning at Lakeshore. Although the adjustment was a little scary, she continued moving forward toward her goal of earning a nursing degree.

Early on during the pandemic, Alivia’s mother, Jennie Muckerheide, received the news her position was eliminated by the company she had worked at for 21 years. Jennie’s husband asked her if she considered going back to school for nursing, the program she started in after graduating from high school, but eventually left.

While Jennie considered her options, Alivia was finishing pre-requisite courses at Lakeshore and about to begin her first semester in the Associate Degree Nursing program. Jennie had been talking with Alivia about the ample opportunities in nursing she was going to have and started thinking, “I could have those same opportunities.”

Jennie applied at Lakeshore and after getting everything in order, learned she only had to take four courses before starting in the nursing program. Like many Lakeshore students, she received credit for prior learning by submitting transcripts from her earlier nursing coursework and from the bachelor’s degree she completed in business/marketing. She took her four courses over a few semesters, putting her only one semester behind Alivia.

Learning together, supporting each other.

Besides studying together, both students found benefits to being in the same program at the same time. Alivia says she does her best to motivate her mom and Jennie likes getting Alivia’s textbooks after Alivia is finished. “Although she usually bought the textbook, my trade-off is that I bought groceries,” Jennie jokes.

“My mom reminds me continuously that the end is near and I need to buckle down for a little while longer,” says Alivia. “She’s my shoulder to cry on, the level-headedness I need sometimes, and a listening ear.”

Both Alivia and Jennie like Lakeshore’s small class sizes, in-person learning, and the instructors. “The instructors bring to the table their RN experiences which help us relate to topics. They don’t just regurgitate information – they incorporate real stories into their case studies,” says Jennie. In addition, Alivia says “They are flexible with their time for meeting about exams or questions regarding the material.”

The nursing field has been hit hard by the pandemic. Despite nurses leaving due to pandemic-related stress, Alivia and Jennie both say being able to help people provides a great deal of satisfaction. Another benefit of the field, which Jennie took into consideration while deciding whether to return to the business world or return to nursing, remains solid. In Jennie’s words, it’s the “endless opportunities – long-term care, acute care, home health care, hospice, administration, research, and the list goes on.”

Alivia is working as a Nurse Extern at HSHS St. Nicholas Hospital in Sheboygan. Jennie is working as a Certified Nursing Assistant (CNA) at Aurora Sheboygan Medical Center. Both want to continue working where they are after completing their degrees and passing their National Council Licensure Examination (NCLEX), which is required in order to identify and work as a Registered Nurse (RN).
Both Alivia and Jennie encourage anyone considering nursing to pursue their dreams.

Jennie says her years of life experience have helped her be a better student and will help her become an even better RN. Her advice for someone in a similar situation as hers is: “Do it. In the long run, when you are done in hopefully two years (four semesters of the core classes) you can say ‘I DID IT’ and begin to reap the rewards of a stable, long career in healthcare.” Jennie adds her home support system, which includes her husband and two other children, has also helped her succeed.

Alivia’s advice touches on the need for patience. “Good things take time! Take that job at the nursing home; work the third shift CNA position at the hospital; apply for the LPN (Licensed Practical Nurse) position on the medsurg floor. It will be worth it and provide a small taste of nursing.”

What’s next for Alivia and Jennie?

After graduating in December, Alivia plans to pass her NCLEX and continue her path to a bachelor’s degree. She’ll transfer her associate degree credits and start taking classes at a four-year college in January while working at HSHS. With her bachelor’s degree behind her, her goal will then be to work in a neonatal intensive care unit (NICU).

Jennie plans on graduating in May 2023 and passing her NCLEX. She will then transfer her associate degree credits and continue her path to a bachelor’s degree while working at Aurora.
Lakeshore Technical College is extremely proud that Jennie and Alivia chose our college to be part of their nursing education pathways. We are also confident that patients under the care of either of these standout women are, and will continue to be, in good hands. 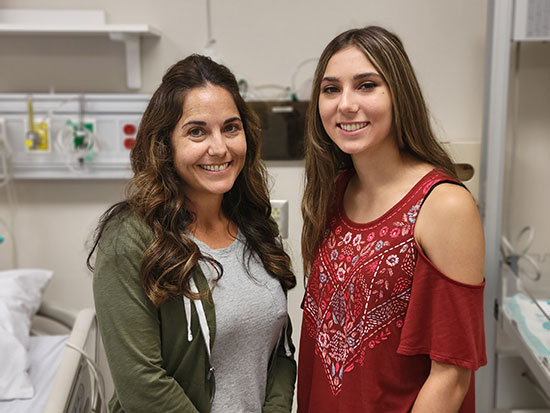 Lakeshore offers a smart start to a bachelor’s degree.

When Alivia and Jennie complete their Associate Degree Nursing education, they will each have saved thousands of dollars compared to attending a four-year college. And since Associate Degree Nursing graduates from Lakeshore take the same licensure exam as do graduates from four-year college nursing programs (with first-time pass rates consistently above the national average), students like Alivia and Jennie can gain valuable direct patient care working as RNs sooner.

Many health care employers provide tuition support for their RNs pursuing bachelor’s degrees. This allows Lakeshore graduates to save even more money on tuition. By the time they complete their bachelor’s degrees, they will have far less student loan debt than many students who attend a four-year college from the start, and a long list of career opportunities ahead of them.