When Pablo Gomez walked across the stage to accept his High School Equivalency Diploma (HSED) in May 2019, he knew his worst days were behind him. He also knew a promising future as a welder was ahead.

Gomez experienced many bad days in his youth and found himself incarcerated at 17 years old. Knowing a better future was on the horizon for him as long as he kept working hard, even on bad days, is what he says kept him going while taking HSED classes through Lakeshore Technical College in Manitowoc. The only class he missed was the day his son was born.

When incarcerated at the Manitowoc County jail, various representatives from the community meet with inmates to help prepare them for their release. Upon walking into one of these visits, Gomez recognized his third grade teacher and immediately felt badly that she would see him there. She recognized him. They talked about the troubles he had experienced since they last saw each other, and it was during this visit she encouraged him to put those days behind him by obtaining his HSED. That encouragement, along with knowing he was about to become a father, were what motivated him to begin taking classes while he was still in jail.

“I was impressed with Pablo’s dedication and determination,” says Amy Cops, Adult Basic Education/General Equivalency Development Instructor at LTC Manitowoc. “His positive outlook will assure him continued success,” she adds.

While earning his HSED, Gomez learned that additional education could lead him to an even brighter future. “I didn’t have a father growing up, so my grandfather was like my dad. He would always say ‘Do what you love’ so I talked with Amy about welding, and she called Dave right away,” Gomez says.

LTC Welding Program Coordinator/Instructor David Saunders listened to Gomez tell him about his new newborn son and girlfriend, and how going to school right after earning his HSED would be difficult. Saunders invited the whole family to the LTC welding lab in Cleveland for a visit to learn how LTC could help.

Gomez enrolled in the Welding-Industrial program, earned his technical diploma in December 2019, and worked as a welding tutor at LTC. He served as treasurer of the Weld Club. While earning his degree, he also earned five welding-related certificates. He will finish the Welding-Fabrication Technician program this fall.

Gomez faced a multitude of obstacles while working toward his HSED and welding degrees. Securing dependable transportation and housing were especially difficult. He was grateful for the gas vouchers he received, as well as the food and personal care items he received multiple times through LTC’s Student|SHARE program. His girlfriend, Coral Kramer, watched their son and provided a great deal of support. Family and friends also helped.

“I kept reminding myself that the present wasn’t always going to be that bad if I kept working hard for a better future,” says Gomez. “I needed to find a way to get to school every day, and do all that was possible to make sure my homework and welds were the best I could do.”

Gomez takes great pride in his welding skills. “I love the escape that welding gives me. It allows me to focus on something other than any problems I might be having, and it’s really satisfying to see my work,” he says.

Today, Gomez is enjoying his new welding job in St. Nazianz. He also thinks about returning to LTC in the future to teach and help others in situations similar to his.

To those who may have lost their jobs recently or are looking for something new, Gomez has this advice: “Be open to new opportunities and don’t limit your options. Everyone at LTC is so willing to help you any way they can.”

Welding is a high-paying career and welders are in demand locally, throughout Wisconsin, and around the country. For details on LTC’s welding programs, visit gotoltc.edu/academics/degree-programs.

Options for earning a high school equivalency credential can be found at gotoltc.edu/lift-up-lakeshore. 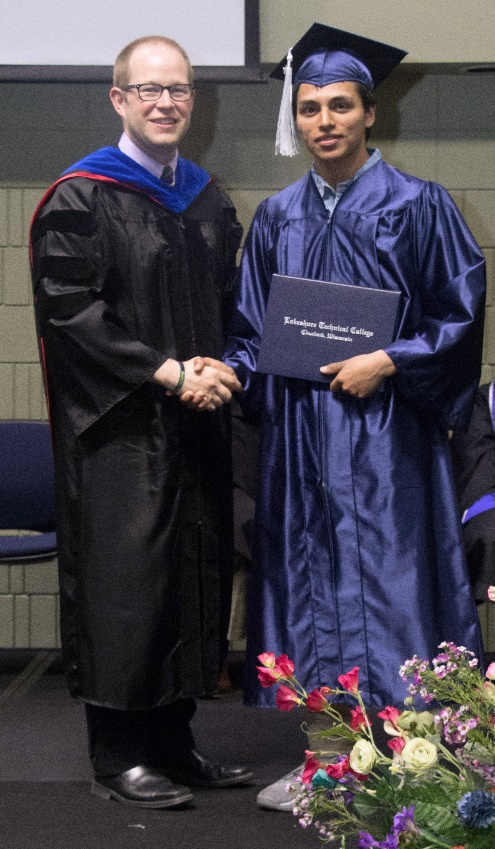 Pablo Gomez, right, accepts his High School Equivalency Diploma from Lakeshore Technical College President Dr. Paul Carlsen in May 2019. Gomez will complete his second welding degree this semester and is currently working as a welder.